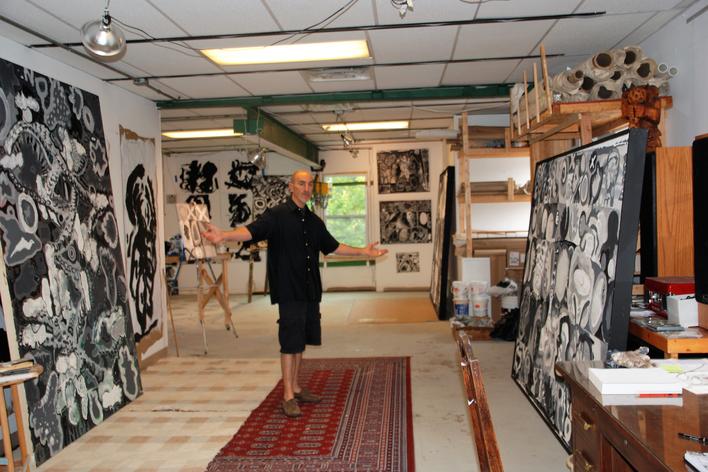 ​​CARL CELLINI's latest work explores an Expressionist approach to painting and drawing where process and final product are both in play.  His study of martial arts influences how and what he paints. The creation of images  using a primal language of marks, shapes and brush strokes is a key signature of his.  It might be one or two large, quick powerful gestures or a smaller set of marks that construct the image. Regardless, he strives to invoke something direct and authentic for the viewer.

In some of Cellini's paintings and drawings the use of  lines and grids help to keep the expression stable. Every painting and drawing is a problem solving event for him and every work requires a strong emotional investment. Each work relates to all the other work and each stands on its own. In the end he searches for simplicity and clarity.

Physics, time and mythology have been some of the themes he has focused on in this past year.

Carl graduated from Tyler School of Art at Temple University in 1980. He has shown in numerous galleries regionally during his forty years of painting. Most recently he was awarded a top prize at the Oxford Art Alliance in a nationally juried show by Tom Padon formerly of the Guggenheim and currently of the Brandywine River Museum of Art.

All works on this site are for sale unless otherwise noted. Prices available by request. Contact Lisa Cellini at Lisacellini5@gmail.com.

Over a hundred other paintings and drawings sold to various clients over the years. (list available upon request)